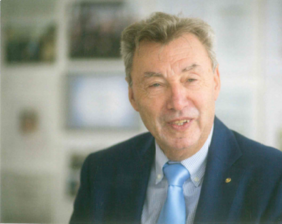 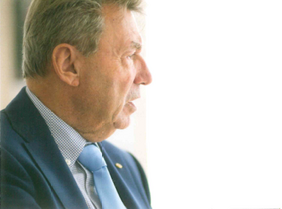 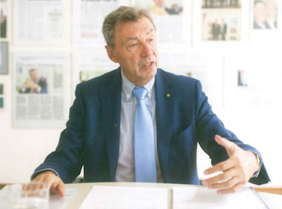 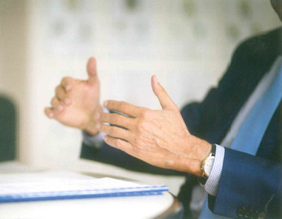 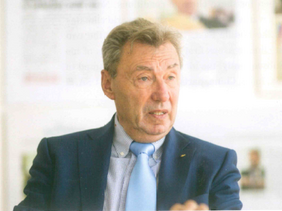 „Own funds and integration“ are words often used by Viktor Wagner, Managing Director of Reiwag. With “own funds” he means: “Never depend on a bank” and with “integration” he is referring to his employees. In actual fact, a career in the bank was planned for him, but he decided otherwise.

Following a stay in the USA, Viktor Wagner confirmed his intention to take up a position in the cleaning company founded by his grandfather in 1903, despite already having a safe job in the bank which he could have made a career out of, as Gerhard Randa did, his then fellow colleague.

In 1967, Viktor Wagner flew to New York, where he took a look at the cleaning business of the future, as the USA was way ahead of the old continent on this point. The company was called “National Cleaning” and had over 10,000 employees on its book in those days. “I was able to take a look at the company with Norman Davies, the vice-president, and in a short time he showed me how to run a company and what it takes. “ Running one`s own company was of course an arduous journey but it was worth it albeit taking a while to do so.

Viktor Wagner became self-employed. However, clocks ticked a slightly slower pace in Austria in the 60`s so he took it upon himself to visit all the companies in the Ringstraße “to introduce myself and I wanted to clean their windows.” Towards the end of the 60`s, new office blocks began to be constructed in Vienna which opened up huge opportunities for him as he had already gained experience with his small company which, in the meantime, had employed a number of staff: “What particularly went in my favour at the time was that my competitors had very little knowledge of work scheduling, organization and the know-how which I had gained from my trips to the USA.” However, he didn`t just stick with cleaning. In 1970, he advised the Shell Company at their new office building in Vienna about cleaning-friendly equipment and he supported a company in Switzerland with their development of cleaning machines.

In the following years, not only did the flow of contracts grow but also the networks. “We expanded our service activities to facility services, and thus were able to offer our customers a complete range of building maintenance services from once source.” REInigung WAGner (Wagner Cleaning) – REIWAG had developed into a holistic service provider including technical facility management (FM).

After Eastern Europe opened its doors in 1990, branches were also established abroad. The first was opened in Prague and now the company is active in five different FM service sectors. In Prague, Reiwag operates the street cleaning and garbage collection services, in Serbia plastic bottles are recycled and office buildings serviced, as well as car factories in Slovakia and many shopping centers in Croatia, in Romania, Reiwag specializes in managing apartments which have been repossessed by the banks due to loans not being serviced. Making roads into CEE/SEE region was not always easy as the entrepreneur recalls one of his biggest challenges arose when opening his first branch Prague: “We had to deal with the post-communist mentality and motivate the people, though there were a lot of hungry people there who understood this new philosophy”

The concept of growth was a given thing but that the company should one day become so big…”I wouldn`t have dared to dream of it” says Wagner: “It wasn`t the sort of starting point that one would expect it from.” A company of this size can only be run by good and reliable staff with a high degree of self –responsibility. Integrating the staff was always a serious concern for Viktor Wagner and thus it comes as no surprise that many of his employees have been in the company for decades. “My co-managing director, Thomas Dittrich, has been in the company for 28 years and follows in his father`s footsteps.” Character, knowledge, ability & diligence are the indispensable qualities of management: “When one of these points is missing then it doesn`t work, they have to go hand in hand” says the managing director speaking over 40 years of experience. At Reiwag, the staff members that possess the qualities often go from being “rough diamonds” when they walk in the door to management positions with the help of support and training.

The company not only stands out for its management team but it also has the lowest staff turnover rate in the sector. “Everybody has to feel that he or she will be handled equally and we have managed to achieve this and it`s an important motivation system today”. Thanking each of his staff personally is an important issue for Viktor Wagner. Thus, he was out and about 85 times in the previous anniversary year to personally thank his staff for their commitment. “Praise and gratitude are the best management tools. The attitude towards the company and a sense of well-being within the company is important.” Of course, the financial incentive is also important and therefore, over the years, the managing director has “perfected and continuously refined the company`s bonus system”.

Viktor Wagner still enjoys the work and is always on the lookout for new ideas and services: “It`s a pleasure to think something up, to shape it in my mind and then to implement it.” Most of the time, this brainstorming takes place during meeting with the customers: “What can we do to create new services which add value for the customers and facilitate a win-win situation?”

Another point which he places great emphasis on, based on experience, is new technical developments. “I enjoy working with people who have visions and when one thinks along with them, then one can make use of them.” All these exchanges are accompanied by his biggest and permanently most beautiful professional challenge: “Make the person asking become the person being asked for.”